last week I stayed a night in Devon with old friends Nic and Sabine. Tilda renewed her acquaintance with Rody, their huge and very laid back deerhound cross lurcher. he isn’t susceptible to her feminine wiles and refused to give up his stick. in the field next door there were three alpacas, recently sheared and looking like extremely long thin poodles. T was sure they were deer and had to spend most of the time tied up.

Sabine and Nic have almost finished their beautiful new workshop. the lower half is built of cob (clay and straw), with a white lime render top coat – soft and organic in shape. above it it wood lap. with the wooden floor, and a projected open wood fire in winter, it will be pleasant to work in and pots should dry well.

Nic’s new anagama kiln, replacing the old out-in-the-open hog-back which I helped fire a couple of times, is under a solid roof, and sheltered by the other buildings – much more comfortable for the crew.

a lovely place to work, especially in the summer.

the pots all lie about outside when finished, which somehow makes them more beautiful. these two huge bottles of Nic’s have big cracks horizontally around them – presumably because they are thrown in sections and then subjected to horizontal stresses pulling them apart during firing, as they are fired on their sides. anagama firing always produces a lot of spoilers. the cracks on these do not detract from their quality, it’s just all part of the process. (his website here)

Sabine’s work is much quieter and made with huge attention to detail, fired in her “fast fire” wood firing kiln with soda.

I have crewed this kiln, and it was nowhere near as easy to fire as you would think! very easy to clog it up in fact, by rushing it with too much fuel …

the dry weather has made Devon a little less lush than usual, but driving to see another potter, Doug Fitch, I found myself amongst deep narrow lanes

hedged in with bracken, swooping up and down the hills and valleys

with a lovely wood opposite, from which he digs the clays he uses to make slipware, which follows on from, and improvises on , the traditional pottery of Devon. I completely forgot to take any photos, too busy talking and looking, which is very sad, so I have borrowed a couple and there is a short film about him and his work here – it’s on facebook so I hope this works for non-facebook users – his website is here 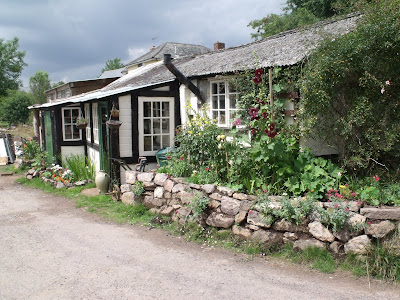 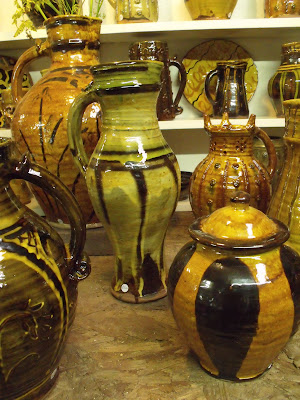 a sample of his exuberant slip-wares. I am saving up.

This site uses Akismet to reduce spam. Learn how your comment data is processed.